The following post is from the NOAA Battle of the Atlantic web site. You can see the orginal, with all the other expedition blogs at:
http://sanctuaries.noaa.gov/missions/battleoftheatlantic2/log_082209.html

Boats and weather - they are a constant battle for anyone who makes their living on (or under) the water. Just as the flotilla of project boats are back on-line, Hurricane Bill skirts up the Eastern seaboard. The Battlefield of the Atlantic crew can only watch the 12-15ft swells make landfall on Atlantic Beach over lunch on Saturday.

As the waves roll in, it gives the team a couple days to catch up on the data wrangling that accompanies any given project. Plotting field drawings on the site map, a much needed wash of the dive gear, and in my case, time to work up the hundreds of images that are generated during each day. My latest batch of photographs was generated on the U-85 late last week. Although Dave Conlin and I had the opportunity to dive the site earlier in the project, on this trip we would be working with one of the greats in underwater photography, David Doubilet.

David’s wife, Jen Hayes, had contacted MonitorSanctuary Manager, Dave Alberg after a web hit referencing artificial reefs along with our current project. Although most people assume this term only applies to purposefully sunken vessels for the enjoyment of the dive community, the phrase actually encompasses a much greater collection of submerged resources. In the framework of this project, WWII wrecks also qualify. David and Jen have been working on an article for National Geographic Magazine addressing the topic and requested some time with the Battle of the Atlantic team to generate some images. So it was back to Nags Head, NC for Dave Conlin and I to meet up with David and Jen and charter with Bill McDermott and the Outer Banks Dive Center crew.

I first met David back in back in 2000 on the USSArizona, while the National Park Service Submerged Resources Center was conducting a corrosion study on the 608’ submerged battleship. He was brought in to shoot for an article on the 60th anniversary of the Pearl Harbor attack for National Geographic Magazine. The story examined the current condition of the American icon and the stewardship responsibilities of the National Park Service. For a young underwater photographer eager to learn from the best, the experience was invaluable. There, as with the U-85, his eye for the dramatic was unmistakable and his laidback, yet disciplined approach to creating an image was refreshing.

We met up with David and Jen at the dock and helped them load a small fortune in underwater still cameras and lights. The hour transit to the site gave us the opportunity to catch up and plan what David wanted out of the shoot. During the previous week’s dive, I had created a photo mosaic of the German U-boat, which helped us plan the dive. Immediately David’s finger went to the forward deck gun as the shot. Agreed, I thought to myself. Not placing myself in the same league as David, seeing the shot and creating it are two very different things.

Conlin and I had some project related tasks for the dive, which including lowering a YSI environmental sonde into the open hatches of the U-boat. This instrument collects environmental data about things like dissolved oxygen, pH, salinity, and temperature that will feed into corrosion studies. As we were diving closed circuit rebreathers, our bottom time was easily double the time of David and Jen on standard SCUBA cylinders, so we splashed first.

As I descended upon the U-85conning tower, I briefly made the connection between the U-boat and the first successful submarine, the HLHunley, that I had imaged not so far down the coast off Charleston, SC. So much history underwater. So many stories to tell. These stories are exactly the reason why I became an underwater photographer in the first place—it’s time to get to work.

A quick check of my rebreather, depth and time and we were off to the stern to place the YSI. We met up with David and Jen 30 minutes into our dive just as planned. Conlin’s task was to accept cryptic hand gestures that are randomly thrown out by underwater photographers when we need the “talent” to move up, over, or simply stay. His years deciphering my hand rants had paid off as he was easily able to comprehend David’s cues. I spent the dive hovering behind David shooting stills while Jen crouched behind the deck gun and lit Conlin with underwater lights.

To be honest, I’m not really sure what I expected watching David shoot underwater. After years of admiring his work, I guess magical rays of sunlight at his beck and call or the ability to usher in a pod of bottlenose dolphin to serve as a backdrop would not have surprised me (none of which happened by the way). What I did see was a professional working to get the shot. It occurred to me “that’s the key.” Work. Rarely do the portfolio shots simply come along. Most take work and working underwater is not easy. And it doesn’t matter if you are David Doubilet, an underwater shooter with the NPS or an aspiring photographer with a point and shoot camera. I have always maintained that taking a picture underwater is not difficult in our digital world. Creating an image takes discipline and work. For the remainder of the dive and some of second descent to the U-85, we worked with David to create the shot. I have no way of knowing if the U-boat images will ever see publication, but for me, personally, it was a great day to catch up with fellow underwater photographers, talk f-stops and megapixels, and reaffirm that difference between the best and the rest is two things– discipline and work.

Posted by brettseymourphotography at 9:28 PM No comments:

Posted by brettseymourphotography at 10:24 PM No comments: 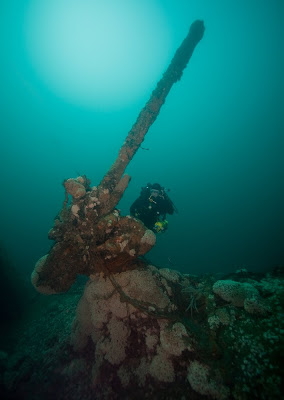 Morehead City, North Carolina - U-Boats have always had a unique place in the dive community. There is a large population of divers out there who are simple U-Boat obsessed. Perhaps the success of Shadow Divers has fueled the fire, but the flames were there long before that. What I find astonishing is the lack of respect some in the dive community have treated these historic sites and maritime graves. Any artifact, features or even loose metal that can be blasted, pried, chiseled, air lifted or simply yanked off these sites has been. I guess I will never understand finder’s keepers mentality when it comes to public’s maritime heritage.

The U-Boats have been great dives, although, I must admit they lack a certain sense of awe. Perhaps because they have just been pillaged and plundered to death. All that remains is what couldn’t be stolen which is basically the pressure hull and conning towers. Even the deck gun has been ripped off the U-352 and is decaying outside a dive shop in Morehead City. My desire, and I suspect that of the dive community is a more intact sense of site preservation. I understand the site will deteriorate, however the pathetic argument that if “I don’t take an artifact, its just going rot away” is not valid. A few who rob the masses of a truly great experience is unfortunate.

Perhaps the other reason, less tangible or controversial, is based on my past experiences diving on incredibly historic and well preserved icons of our nation’s history. In the context of this project, the HL Hunley comes to mind. After spending months as the project photographer for the recovery of the first successful submarine in maritime history these U-Boats seem modern. The fascination of the U-Boats to the dive community is the ability to dive a true piece of history - and one that plays a captivating role. Even in there looted, stripped and broken state, they are authentic. Not an artificial reef submerged intentionally, but a physical connection to the past and our history as a nation. My career with the NPS has allowed me to do this very thing, on so many occasions, and for this I am incredibly grateful.

Posted by brettseymourphotography at 9:58 PM No comments:

Battle of the Atlantic Expedition 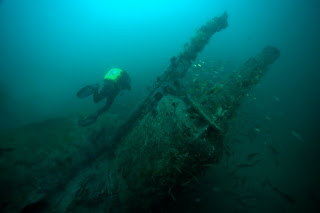 Morehead City, NC – The next stop in a long summer of back to back projects is a U-Boat expedition with some colleagues from the National Oceanic and Atmospheric Administration (NOAA). The team, largely comprised of maritime archeologist, is examining the Cape Hatteras area of the NC coast often referred to as the Graveyard of the Atlantic. The goal of the project is to documenting both the German U-Boats and some of their Allied casualties from WWII. The work began last year with mapping operations on three U-Boats – the U352, U85 and the U701. This year the team is focusing on a site called the Bedfordshire, a Brittish trawler sunk by the U352. My job is to document the submerged sites and work with Dave Conlin, Chief of the SRC, on corrosion potential measurements on selected sites. Due to logistical needs and scheduling, he and I have been chartering dive boats to visit the German subs. You can learn more about the project, the team and follow the expedition on the project blog at http://sanctuaries.noaa.gov/missions/battleoftheatlantic2/

Posted by brettseymourphotography at 9:03 PM No comments: 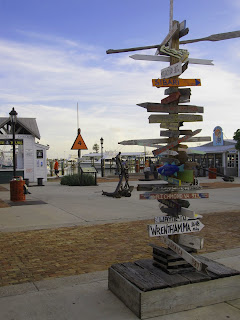 Key West, Florida - Today we came off the Dry Tortugas enroute to the next project. As we unloaded the commercial ferry Yankee Freedom with enough Pelican shipping containers to mobilize against a small country I noticed a series of directional signs in the Key West street. Upon closer examination one destination caught my eye. Pittsburg, NH – a place I grew up snowmobiling with my dad – 1845mi. It’s not quite as far as you can get from here in the continental US, but pretty darn close.

Posted by brettseymourphotography at 2:00 PM No comments: