In The Presence of Greatness

As we wrapped for the day and were motoring for a protective anchorage at San Miguel Island the team spotted some breaching whales in the distance. We slowed the boat to a drift and kept a sharp eye on the horizon. Again, a breach. It appeared to be three humpback whales in the shallows just off the kelp beds. A few minutes later the mist arose again and the whales had turned and where heading in the general direction of our drifting boat. As the whales continued their track along the southern shoreline of San Miguel we paralleled them several thousand feet off in deeper water. With each breach a flurry of shutters from the photographers on board trying to capture a signature shot of the lifted tail as the beast submerge. For several minutes the crew scanned the horizon looking for the humpbacks. Nothing.
We started to surmise that they had turned for deeper water at our stern and were heading off shore when we heard the deep, powerful exhalations just off our bow. The humpbacks had surfaced not 25ft off our bow. Two massive animals, presumably females and one small juvenile. They were the most massive creatures I have ever seen. Each one rose and exhaled with a mist rising into the golden sunset. Such amazing grace and beauty. Three times these giants surfaced just feet off our bow. Each time more impressive than the first. They were close enough to see their entire body through the water as they tracked along with our vessel. On a couple breaches they slipped beneath the surface with the signature shot of the tail raised out of the water. The image was so striking against the glow of the setting sun. Breath taking is all I can say to describe it. 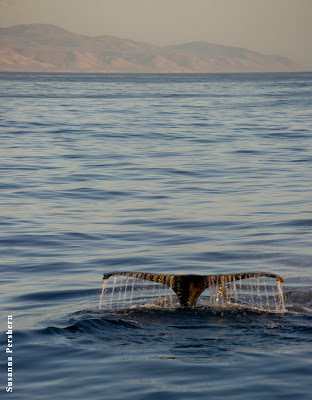 The group surface a couple more times then turned for deeper water as our boat drifted past them. That last trace of them off our stern was a fully extended tail backlit against the sunset. In the presence of greatness - what an honor.
Posted by brettseymourphotography at 2:44 PM