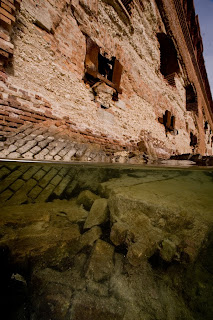 Dry Tortugas National Park, Florida - So, I wanted to capture the state of collapse in one of the walls of Fort Jefferson for the park curator and archeologist. I thought I could balance the right amount of intrigue with disrepair by generating a split level image. In the never-ending uphill battles for funding and support to maintain our historic resources in the NPS, I know the value of the good image (Fortunately, so does the NPS or else I would not have a job). Anyway, I also was curious about the marine life inside the moat surrounding the fort. Seemed straight forward until I heard tales of a horrific sea lice attacks on a masonry worker who had need to wander around within. I counted the costs. Of course the pursuit of the image won out. Next I queried some park staff as to the depth. The consensus was anywhere from 4 to 12 ft deep. Very manageable indeed. The next obstacle was access. Moats were not designed with entrance or exit latter for obvious reasons. A sluice-way provided the necessary location for my expedition.

So in I went. With ever prick of sea grass on my legs, I knew the lice had come to devour me. The depth estimates had proven to be quite generous. In most areas I could barley clear the bottom. I was walking inch by inch with the tips of my fingers over the sea grass. I reached the collapsed areas I would focus on. Was that lice biting me? No just underwater debris. After shooting several splitlevels in various areas, I headed back to my point of exit. I stopped to admire a large patch of upside-down jellyfish. Jellyfish - they have always been an intriguing mixture of beauty and death in the same fascination package. I needed a more interesting perspective. Being an expert in all things underwater, I knew they would only sting if touched by the tentacles which reached for the surface. If I was careful, I could reposition one and fire off a few frames. My over developed confidence soon diminished when I felt the intense pain as it gently brushed across my arm just by raising it into the water column for the sake of art.

I managed to not so gracefully climb out of the moat by scaling the brick wall where I entered. Feeling pleased with my execution of “operation moat” for the sake of photography I walked back to the fort. I was dripping wet with a stinging arm and some still undetermined bite sensations in various places around my body. As I entered the interior of the fort, I passed one of the interpretive rangers from the park. “Get some good images?” I started to construct the perfectly worded response of my conquest but all I got out of my mouth was “Yes, I was in the moat…”. “The moat?” was her reply. “You’re not allowed in the moat”. Forgiveness vs permission. Not the first (and mostly not the last) in pursuit of an image.

Posted by brettseymourphotography at 8:37 AM