This morning as I was sitting in church when my eyes wandered out the door and saw two young boys were playing. There ages appeared to be very similar to my own, 6 and 4 years old. They were climbing some rocks on the side of a hill and hanging off the branches of a small tired tree. With each leap and subsequent swing the limbs would bow and come to their breaking point. The older boy would lead and the younger following right behind. Boys. I have seen this progression thousands of times in my own home. Fixated I thought about what contraptions and manner of adventurer my two were undertaking some 8571 miles away. The older boy left my view for a few moments as the younger took his chance to explore the tree not under the control of his elder. When he returned he had a series of rags or cloth strips tied together. 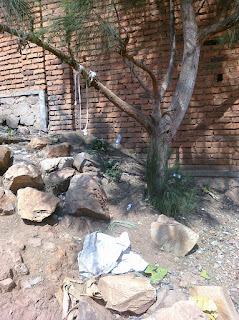 Again, seeing this first had at home, two possibilities were about to happen. The first, he was going to tie up the younger with lofty stories of adventure or he was going to tie the “rope” on the tree to up the ante on the adrenaline factor from merely hanging. He stood, hands over his head and tied each end of the line to the branch on a tree which allowed it to hang in a u-shape. The next challenge was to climb up, place his feet through the newly fashioned swing and enjoy the ride…assuming it held. I sat in the pew fascinated by these boys being, well…boys. Sure enough, he got his legs through and in one great controlled fall, let himself go and swung out over the rocks some five feet below. The limb struggled to sustain the weight of the boy as he kicked his feet up and enjoyed the ride. It held, but barely. My mind again drifted back to Denver and my boys. I recalled all the times I had walked into our dining room and Cameron, my oldest, had his younger brother Chase hog tied with a dog leash and was trying lift him up via an exposed beam of our home. The African boys were gone by the time I got out of church. Off the next big adventure, no doubt. There are few absolute certainties in this world, but a universal (and apparently international) one is that boys will be boys the world round.
Posted by brettseymourphotography at 5:26 AM