Celebrating our Independence at a Civil War Prison…Sort of 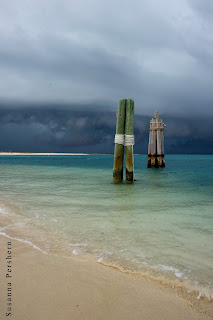 Dry Tortugas NP - Today the grayness which has plagued this shoot continued, except we were also blessed with high winds and rain. The perfect mixture if you don’t want to shoot underwater. The production crew attended a small cookout hosted by the Park Service staff that reside and work on the island. There has always been a certain deserted island mentality to working here over the years. If you need it and I have it, its yours. Relying on a sense of community takes on a whole new meaning in the middle of the Gulf. Something that seems to be lacking in the typical US neighborhoods of today.
Here on a tiny rock 90 miles from Cuba surrounded by a very big ocean there were very few reminders of the 4th of July. When your working 12-14hrs a day, every day of the week you tend not to recall what month it is, much less what day. Holidays are something that happen somewhere far away with parades and family cookouts. Even here, I had two very brief reminders of independence. First I thought about how much it would have absolutely sucked to be a be here during Fort Jefferson’s construction or its use as a civil war prison, as a prisoner or guard. Everything I have ever seen about the way of life during that period seemed difficult enough without being cut off from the world in the middle of the ocean wearing wool uniforms. The second salute to the 4th was some random visitor belting out the star spangled banner with an operatic twist from a distant casemate within the fort. Considering the distance from the mainland and how depressing its been not being able to generate good footage, he actually sounded quite good. I guess everything in life is relative.
Posted by brettseymourphotography at 7:15 PM