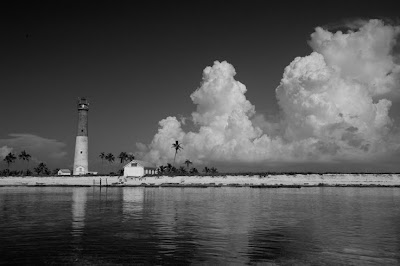 Its kind of a cliché, but after a long filming project where everyone has worked so hard and on the last day, the last dive and even the last shot is one of the most spectacular of the entire production its very rewarding to actually say “that’s a wrap”. Today was phenomenal. We spent the majority of the day on the backside of an island called Loggerhead Key. If you can picture the most remote, uninhabited white sandy beaches with warm tropical water gently lapping the shore and vibrant coral reefs within snorkeling distance, you have only begun to image the beauty of Loggerhead. As Jimmy Buffett one wrote, for years it has been my “One Particular Harbor”
“I know I don't get there often enough but God knows I surely try it's a magic kind of medicine that no doctor could prescribe
But there's this one particular harbor so far but yet so near where I see the days as they fade away, and finally disappear”
After shooting in the coral reefs at Loggerhead we decided to follow up on a lead that Kelly Clark, a friend and fellow photographer who works at Fort Jefferson, gave us about the old coaling docks right next to the fort adjacent to the anchorage. Next to the moat walls surrounding the fort, this is the most popular destination for day trippers on the tourist ferries. With the entire 100 square miles of national park to shoot in, I found it hard to believe that something so close and easy would pay off. Of course, I was wrong. The coaling docks in the afternoon light were a paradise of corals and fish. Schooling bait fish by the millions pulsed in rhythm in front of the cameras creating highways of movement. Large barracudas, attracted by the reflection of the camera port swam within inches. Even the 5ft tarpon and snook, fish that don’t want anything to do with awkward humans underwater, swam gingerly past the cameras as if to pose because they knew how desperately we needed the footage. It was a spectacular day. It was a day in the Tortugas. 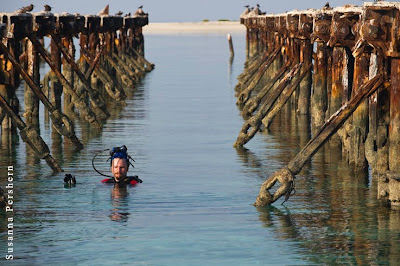 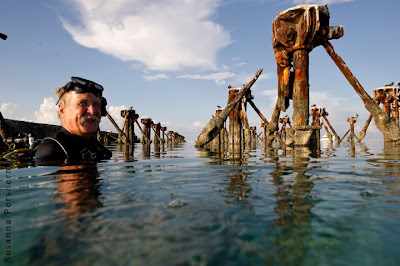 At the coaling dock everywhere I pointed the camera Maryann would yell into the diver communications from the boat topside “stop, stop, stop…this looks awesome”. The light was so good, the fish so cooperative and the coral so vibrant we stayed long enough to kill the batteries in the diver communications. Maryann and I were yelling camera moves back and forth to each other from the boat to the coaling docks because the camera monitor had also died. And for only the second time in thousands of dives, I drained my tank of every available breath. Literally when I could not breath anymore, I stood up, pulled my OTS full face mask off and said “that’s a wrap!” And yes, I was smiling!
Posted by brettseymourphotography at 7:49 PM