The Aichi E13A, Allied code name “Jake,” was an Imperial Japanese Navy (IJN) long-range reconnaissance seaplane used during WWII for maritime
patrol duties and was considered the Navy’s most important seaplane.
The Aichi E13A1 made its combat debut in 1941 and was used by the Japanese Navy until 1945.

E13A1s participated in a number of significant aerial operations prior to Japan’s entry into WWII, including bombing attacks on the Canton-Hankow railway in China and reconnaissance flights over Hawaii immediately prior to the attack on Pearl Harbor. These initial successes inspired the Japanese Navy to deploy the aircraft from ships and forward shore bases. They were also used in a limited capacity as bombers, but only in areas where air opposition was restricted or nonexistent. Although largely successful in its designated roles, the Aichi E13A1 was impeded by a handful of issues
including a small fuel tank, minimal crew protection and limited defensive armament. 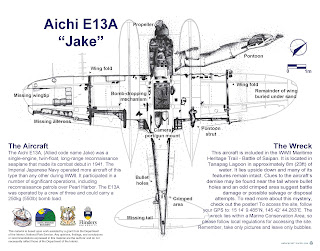 Posted by brettseymourphotography at 7:55 PM