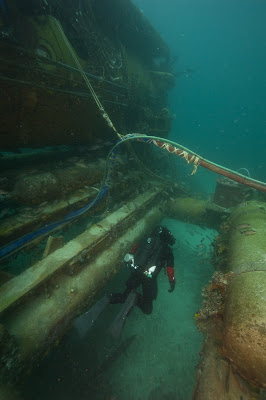 As we descended down the anchor line and hit the sandy bottom I really was not sure what to expect. I have seen pictures of the habitat for several years, however images often lack a sense of scale or environment. The first part of the dive was spent doing “clever diving tricks”. Check the electronics; increase the oxygen in the breathing mixtures, and switch back and forth to open circuit bailout. All the skill you want to show up as second nature when you really need them and your life is on the line. As we swam to toward the habitat out of the gloom was this enormous submarine looking structure. The size was quite dramatic. We peered through the portholes where some of the UNCW staff were working away at maintenance and general upkeep. I had to restrain myself from tapping on the glass and waiving like a tourist. For the remainder of the dive we swam around the structure admiring the design and construction. The marine life surrounding this artificial reef was spectacular. It was an entire ecosystem both outside and in that supported life. The irony was how much infrastructure it took simply to keep humans alive, yet the dizzying array of life on the outside was much more beautiful.

We ended our dive with a debrief as every member of the team recalled child hood stories about living in an underwater house. Dreams of an aquanaut, apparently they are shared by those who have pursued a career under the sea.
Posted by brettseymourphotography at 9:08 PM