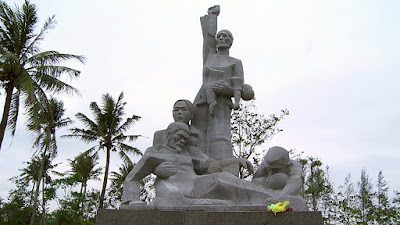 Son My, Vietnam - After visiting the Chau O playground site that UniReach constructed two years ago, we spent a few hours at the site of the My Lai massacre outside of Quang Ngai. This was the site of the mass murder conducted by one unit of the US Army on March 16, 1968. Between 347 to 504 unarmed citizens of the town, all of whom were civilians and the majority of women, children (including babies) and elderly were sexually abused, beaten, and tortured.

The village was burned and a large number of the dead were piled in mass graves, including a drainage ditch which is a focal point of the site. The US military first congratulated the unit for “outstanding job” claiming that “128 Viet Con and 22 civilians were killed” during a “fierce fire fight”. A year later in March of 1969 a former member of the unit sent a letter detailing the events at My Lai to President Richard M. Nixon, the Pentagon, the State Department, the Joint Chiefs of Staff, and numerous members of Congress.

Eventually, the platoon’s Second Lieutenant William Calley was charged with several counts of premeditated murder in September 1969, and 25 other officers and enlisted men were later charged with related crimes. All the charges were eventually dropped with the exception of Calley who was convicted of life in prison. After President Nixon allowed Calley released from prison pending an appeal, his sentence was adjusted and Lt Calley served 4 ½ months in a military prison. In November or 1969, over a year and a half after the events at My Lai, the American public learned about the massacre and trials through the pages of Time, Life and Newsweek.

Learning about these events for the first time, my immediate reaction was to wonder how often these types of atrocities occurred on both sides of the conflict through the war. Although very slanted toward an anti-American sentiment, the memorial was powerful and a true testament to those innocent civilians, ages 1 to 82, who lost there lives on March 16, 1968.
Posted by brettseymourphotography at 8:49 PM