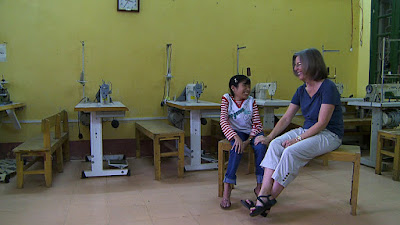 Sac Son, Vietnam - We traveled north to visit one of Hanoi’s poorest areas, the Soc Son District were UniReach and its partners had assisted in the construction of a new school designed to be a prototype for inclusive school buildings throughout the country. Handicapped children have traditionally been ignored in Vietnam. Literally hidden away from society by family and overlooked by the socialist government. Today this prototype school educates 300 students, with 120 having special needs.
While we were there we encountered a recent graduate. Although 19, here physical impairments made her looks far younger. A girl had such a sweet spirit and a smile that lit up the room. The school had taught her a trade – sewing, and she had gone on to become a seamstress. Although a success story on the surface, after more discussion we learned she worked from 7am to 6pm seven days a week. For her labor, her monthly income was $30 – a staggering $1 a day. Due to here impairments she lives with here parents to which she gives all her income. When we asked her if she liked her work and what she wanted out of the future her countenance sank if only for a second – an expression I will never forget. Then, almost as if she realized she was required to be optimistic for the sake of foreigners or the cameras, she rallied, flashed a smile, and responded she didn’t know what the future would bring – after all she was handicapped.
Posted by brettseymourphotography at 7:59 PM