Isle Royale National Park - Anyone who chases the dream of actually breathing underwater realizes it is equipment intensive. At a bare minimum, one needs a tank to breath, a regulator to move that air from high pressure to low, a mask to see, a buoyancy compensator to assist with neutral buoyancy, some type of exposure suit to compensate for the cold water and fins to swim it all around. Now, add to that any type of underway task, say shooting pictures or making a documentary and you have a very full boat. Consider spending two weeks on an island in the middle of Lake Superior, the next location for the 3D documentary Underwater Wonders in the National Park Service, and you end up with seven boats. 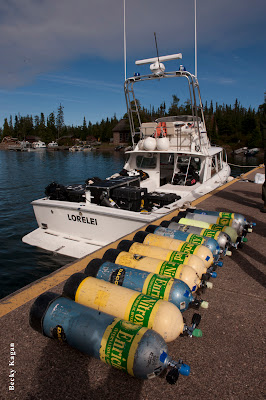 Today the 3D team from Woods Hole Oceanographic Institute’s  (WHOI) Advanced Imaging and Visualization Laboratory (AIVL) arrived on the Ranger III from Houghton, MI to Isle Royale National Park (ISRO). A small advance team from my office along with ISRO Ranger/Divers have been setting up logistics and making some dives in preparation for the 3D shoot. We off loaded all the required production equipment and dive gear from the Ranger II and began loading, case by heavy case, into the smaller park boats. As we filled the first two boats (32’ and 26’ respectively), a third 24’ patrol boat came on-line to assist with the 2 ½ transit of equipment to Windigo, the furthest point away on the south end island – where we would be staging for the next two weeks. When the third boat was full, yet another 32’ Bertram joined into the flotilla. We loaded the crew aboard and slowly the vessels departed. The shoot was on.
Posted by brettseymourphotography at 5:45 PM