With the Good, Comes the Bad

Isle Royale National Park, Michigan - After the high of the Chisholm engine dive, I wasn’t convinced the that the day could get any better. I was right.

The second dive was on the Cumberland & Henry Chisholm wreckage field. These two ships, as though Lake Superior wasn’t quite big enough, ended up shipwrecked directly on top on one another separated by scant 21 years.
The Cumberland, a side wheeler built in 1871 was designed for passenger and package trade on the Lakes. On July 25th, 1877 the it struck the Rock of Ages reef and rand hard aground on a mild and clear day. After several salvage attempts in late July/early August, the vessel was finally abandoned on August 12 and it subsequently broke up and finally disappeared.
The Henry Chisholm, a wooden bulk freighter, was constructed in 1880 and at 270 ft was considered a “leviathan” at the time of constructed as it was the largest steam barge on Lakes. The vessel was built just as shipbuilding was approaching the maximum size with wood as the principle materials. In October of 1898 the Chisholm struck the Rock of Ages reef while trying to enter Washington Harbor carrying 92,000 bushels of barley. For the archeologist, these two sites offer a museum-like exhibit on late 19th century wooden ship construction. For the photographer they offer row after row after row of wooden timbers, frames and fasteners. 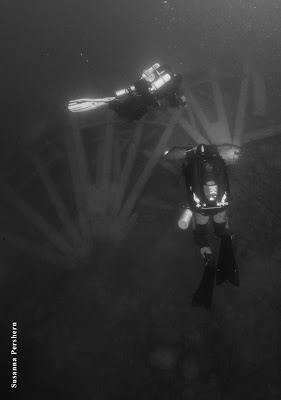 The visibility was horrible as we descended 35ft to the wreck site. From there I wanted to follow the wreckage trail down to 80ft where the paddle wheel was located. When filming, you need to select distinguishing features to highlight or else it all begins to the look the same. Down the wreckage we swam. When we reached the end, we kept swimming and swimming. I knew the others on the dive had to be wondering why I just kept swimming over a rocky bottom with no end in sight. Finally, we reached the paddle wheels. To me, it sounds a bit more impressive that it actually is. There is form to the feature, but its not very visually interesting. You have to know it’s a paddle wheel or any wow factor. No relief, just timbers on the bottom. As I descended down for a close shot, my buoyancy got away from me and I dropped in the silt and a cloud begin to emerge. I slowly began moving forward, just ahead of the looming cloud that would ruin any chance of shot. Not a great shot, but captured non the less.
The rest of the dive was far less successful. Susanna who was diving on open circuit, was running low on air so we needed to head back to the boat. The tether, on the other hand, was hung in the reef in the opposite direction. After swimming with Susana back to the upline, leaving Becky to hold the camera, I returned and swam up the reef to free the tether. On the way back to Becky, both my dilluent (air) and oxygen in my rebreather were nearly empty and my unit was screaming at me because I had been swimming against a current so long and it didn’t like the sustained increased breathing rate. Becky finished shooting at the end of the dive, while I was exhausted and simple followed along till we hit the down line. A less then inspiring dive or performance my me on the site, and of course the footage reflects it.
Posted by brettseymourphotography at 5:55 PM