Isle Royale National Park, Michigan - The wind has settled, for the day, but the forecast is not good. We make an early break for the north shore to image one of the most impressive array of machinery in the park on the bow of the Emperor. The long boat ride has most of us dozing off, trying to say warm in the early morning. After a quick stop at Amygdaloid to change into our drysuits (and use the prettiest outhouse on the island) we are moored up to Emperor bow. 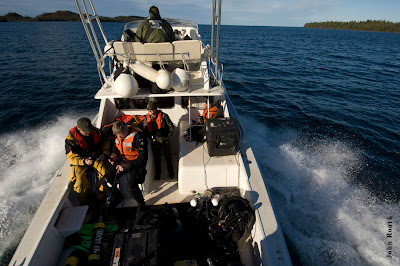 When the steel bulk freighter Emperor was launched in 1910 it was the largest ship ever built in Canada at 525 ft long. Seeing the site in the small, “visibility dependent” glimpses does nothing to underpin that fact. The sheer size of the machinery on the Emperors bow dwarfs the largest of divers. As Becky Shcott and ISRO Ranger and Park Dive Officer Steve Martin (no not him, the other one) slip into the water I am disappointed with the visibility. I swear, if its not the wind an underwater photographer is battling it’s the vis. We proceed over the folded and torn thick steel plating in the bow area and settled on the machinery. 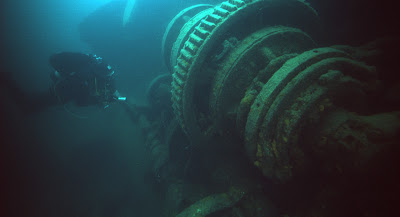 This is what I had come for, the shot I was hoping to represent the massive scale of the these ships. I made a pass with the 3D camera. Not great. I motioned in Steve to hang by the windlass machinery for a sense of scale. As a side note, Steve has always been a quick study of my non verbal, sometimes frantic hand cues to swim, stay, hover, look at something. As underwater models go, Steve is not the best looking I have ever worked with (sorry Steve), but he is one of the most diligent and talented at staying in one spot. Hovering in one spot, looking like your actually investigating or examining something take after take after take is not all that easy. He pulled if off with style. Perhaps Steve’s’ greatest asset as a model is that he will stay planted “working” until I tap him and say otherwise. Nothing disengages a viewer quicker or ruins a shot faster than a diver who turns to see if I am still rolling, and stares directly into the camera with a deer in the headlights look. Not Steve. I could plant him on a feature, swim away and shoot an entire shipwreck and come back to find him still “investigating” the deck hoist.
We roll on a few other large features and swim around the bow structure. Every now and then out of the corner of my eye I see Becky poking into holes or areas worthy of exploring. She fights the urge to investigate and stays with me lighting and tending the fiber optic tether. Although not the vis I was hoping for or the time on the wreck we both wanted, I got the shot I came for. Time to move on while the weather window holds.
Posted by brettseymourphotography at 6:13 PM