Isle Royale National Park, Michigan - I mentioned in an earlier post about returning to a shipwreck as re-visiting an old friend. You know how sometimes you run out of things to talk about with that old friend, conversation slows and it become a bit awkward. Welcome to my day, back on the America because its still blowing.


All is not lost, however. There are several shots that almost worked from our previous dives here two days ago that we can reshoot. Also, we have cleaned up the trim and cabling on the ROV so it’s not so “ghetto” as we say. 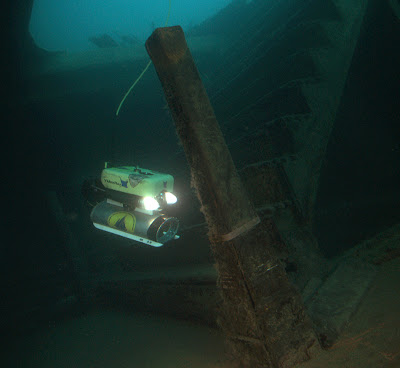 We spent a couple dives reshooting the ROV, although something still is off when it comes to style points. It seems to be sitting at an angle in the water and now one light is very dim. It looks a bit like a wounded robot who is trying to find its way out of the shipwreck, not a stout sophisticated machine investigating the dark recess of a sunken vessel. No matter, there is plenty of there shots to pick up on the wreck, so Becky Schott, WHOI contractor and co-owner Liquid Productions, and I move on.
On our second dive we decent down the stern of the vessel and pass through a slight thermo cline. Always the enemy of descent, the temperature drops from 51 to 42F. To the casual observer, the question may be posed, “what difference does that make, its all cold anyway?”. Correct. However for some reason it does. Somehow as your drysuit constricts even tighter against your body, the cold seems to work its way deeper towards your core. At first its noticed on anything exposed, which in water this cold is only our lips. Soon your arms begin to feel the temperature drop, then it creeps into your chest where it settles. After a few minutes of tying to ignore the chill, you begin to slightly shake and loose some dexterity in your finger. Holding the camera in a tight grip to frame a shot begins to be ache. Its starts to become difficult to turn around or change direction while underwater. All the dreaming of tropical beaches doesn’t help. 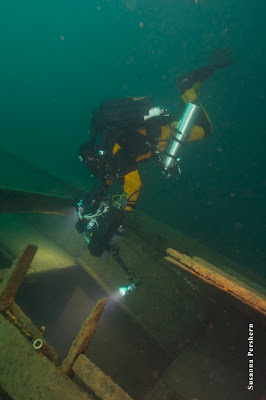 After dropping to the stern at 70’ and setting up a couple shots, we headed for shallower, “warmer” water. As we swam back up the ship to we hit a current running sideways to the ship which made shooting even more difficult. I attempted to pick up some shots on the shallow deck machinery on the bow, but between the current and not feeling various extremities anymore, I was done. Very rarely have I ever reviewed footage after a dive that “wasn’t working” only to be surprised an have it look great. Part of the discipline is knowing when your done, and I was, so we surfaced. May a great deal of time pass until I see you again my old friend America, so we have something new to talk about.

Posted by brettseymourphotography at 6:07 PM