Isle Royale National Park, Michigan - After our run to the north shore and dive on the Emperor another front moved in and the winds attacked. The following day we once again returned to America to try to pick up an ROV shot (still nothing new to talk about with that old friend). The day after the wind was still kicking so we returned to the Silverton fish camp on Washington Island for more in-air 3D filming around the island. If the wind continues to blow this will end up being a 3D film about historic fish camps and scenic overlooks of Isle Royale! 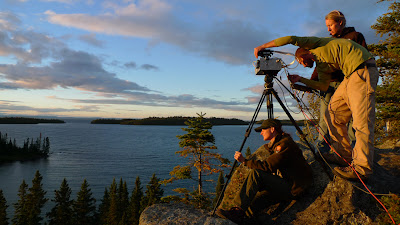 Today I am pulling footage and rendered out some 3D to start building a highlights reel for the park to see before we leave. I use the word highlights generously as we have only covered 1 ½ of the 10 shipwrecks in the park on day 9 of a 11 day shoot. Ouch.
As I spend 4-6 months on the road in to so many National Parks around the country I truly depend on a ton of great people to make what I do possible. Boat operators, mechanics, bio techs, park managers and volunteers to name a few. They are the backbone of any underwater project. I have found that the best way for them to feel appreciated (in addition to saying thank you) is to include them in the process. If you have some good picture of them working or underwater share them. Last year (here at Isle Royale) we started sending a “picture of the day” our to the entire park staff so they could see what we were doing in their park. The response was great. So many individuals who had nothing to do with shipwrecks or diving mentioned to Steve Martin how much they enjoyed that or looked forward to it. Since I have been producing 3D for the Park Service, this has become even more important so those involved can see the format and why I have spent so much time and money shooting the past couple years. 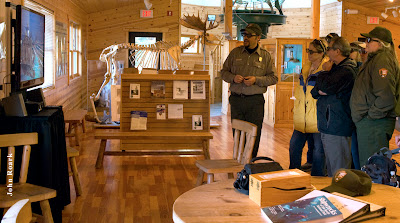 I always love the first time someone in the parks gets to see good 3D. Its so different from anything they may have seen in the movies, because this is real. Its something they can identify with because its in their back yard. Its their park, their resources. So here I sit, cutting a “highlights” reel to show the park staff at some point during the project. In the back of my mind I hope this is a waste of time and the real highlights are yet to come WHEN the wind dies down.

Posted by brettseymourphotography at 6:19 PM