Isle Royale National Park, Michigan - With the weather window, we decided to push as hard as possible and image all we could while the sun was up and the wind was down. From the Cumberland & Chisholm site we steamed another 1 ½ northeast to dive the Glenlyon near the Isle Royale lighthouse.

Next to the Chisholm engine dive, this has become my second favorite dive. The twisted and broken steel laid out on the reef are such a testament to the power of the lake. Also the sight is spread out over a massive linear distance of 900 feet. The steel hulled 328ft vessel which was built in 1893 came to rest astride of the shoal in November of 1924 while running for safe harbor in a storm. After the grounding the captain ordered the ship scuttled (sunk) to secure it to the reef. While light salvage operations occurred as weather allowed, by the end of November the vessel was abandoned and completely disappeared over the winter.

Previous dives on the wreck have provided some of the best “shipwreck” images I have ever shot. I produced a bookmark for Isle Royale National Park from a series of shots on the Glenlyon. Today’s dive was different though. First, after slight over 2 hours in the water already, I was a bit exhausted. Second, it was late in the and the sun was low in the west which means light penetration into the water is minimal. Over the side we went, choosing to swim to the bow section of the wreckage. As we swam toward the bow, my rebreather began showing an alarm of a high level of carbon dioxide (CO2). Usually, this is the a rebreather divers greatest concern. To put it simply, generally this occurs when the rebreather is not doing its job scrubbing out the CO2 from our exhalations and replacing it with oxygen (O2). If this is allowed to continue, the diver gets a headache (usually) then passes out from CO2 build up and dies. So, that said, a CO2 alarm on my rebreather is something to pay attention to. Fortunately, the rebreather I dive has a CO2 sensor (the only units in the world with them thanks to VR Technologies) which allows me to monitor the CO2. Basically, I know what the amount is and can manage the situation from there. As we were at 30ft, I continued to monitor my the CO2 levels and move to the bow. 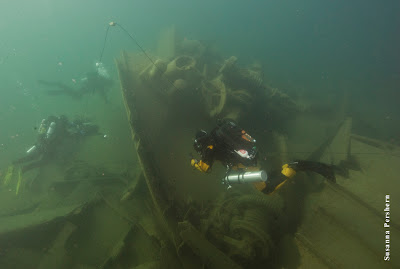 The bow, with all its windlass machinery and anchors was as impressive as usually, however the light was very difficult. It was a waist of time to shoot anything looking toward the sun, so it left only a handful of camera angles and swims available. At some point, my CO2 warning was on the rise, so I handed the camera off the Becky and hung back to monitor and reduce my breathing rate. From there the light only got worse, the dive only got colder and I only wanted to get off my rebreather. Becky rolled on a few things then I called the dive and we headed home.
As I mentioned in an earlier post, knowing when something is not working on shoot is part of the discipline. It took many years for me to understand some things you cant change regardless of how much footage you burn. If the light is not there, its not going to look any better after the dive on the V monitor. Frequently examining your life support systems is never something to be taken lightly or put as a secondary function to camera operation. On this dive, having the best gear possible allowed me to continue to the dive safely and pick up a couple of decent shots. Not having the training or disciple to know when to call the dive would have meant more that just bad light on a bad dive.
Posted by brettseymourphotography at 6:57 PM