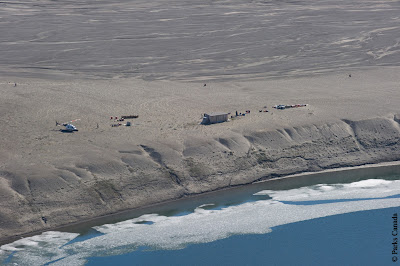 As you can imagine the logistical infrastructure to field 14 people with shelter, food, boats and dive gear is no easy feat. The Parks Canada Western Arctic Field Unit in conjunction with the Underwater Archeological Services have done a fantastic job in planning. Standing on a gravel “airstrip” in the middle of the tundra is where the planning ends and the operations takes over.
We began the day with the third and fourth of our Twin Otter charter flights from Inuvik to Polar Bear Cabin with the underwater team aboard. Upon arrival into Polar Bear we discovered that the advanced archeology team tasked with the initial camp set up was still at the “cabin” – which is really a plywood shack. Apparently the helicopter was a day and half late showing up and not a single load of equipment had been slung to the beach. Setback. The crew quickly began prioritizing both equipment and personal to begin slinging the 40min hop to the shores of Mercy Bay. As the project photographer its always an awkward balance of capturing the process through photography verses actually assisting with the manual labor required for a project of this scale. I tried to stay out of the way and hoped the quality of images would somehow excuse my lack of muscle. The first of the “human” flights as the helicopter pilots say, was underway to retrieve water from the Mercy Falls, several miles from camp. Shortly thereafter I was sent over as part of the initial team to begin the camp setup. I tried to convince myself it was because they wanted aerial images of the camp prior to the full teams arrival, not that they were tired of seeing me wander around with nothing more than a camera in my hand. 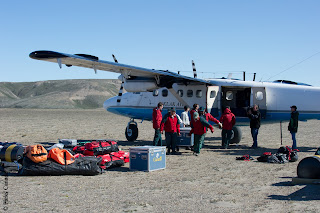 One of the first rules of moving around the tundra by aircraft is always be prepared. That means you always travel with your tent, your sleeping bag and your personal bag. No exceptions. I grabbed my gear, loaded it into the chopper and called shotgun so I could shoot aerials through the nose bubble. As we lifted off I quickly remembered how much I have always enjoyed being in helicopters. The lift and the perception of moving in any direction at the whim of the pilot is quite exhilaration. It’s a certain feeling of weightlessness, similar to diving – perhaps that is my draw to it. In fact, the only job I would considering keeping our of the water for  has always been a helicopter pilot. As we flew a low altitude over the tundra toward Mercy Bay I began shooting the ice flows in the McClure Strait. They appeared to lurk at the edge of the Bay just waiting to drift in with the slightest change of the wind and scrub out the project. 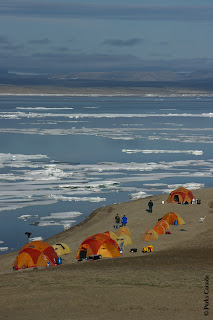 Our campsite is located just feet from the waterline at Mercy Bay, the most beautiful of locations. Not wanting to appear like a rookie, I consulted members of last years expedition regarding just how close to the shore I should pitch my tent. With a little help from veteran team (which kept me from embarrassing myself fumbling with the tent), I got it set up and my personal gear moved in. Then the word came in via the satellite pager – helicopters broken. No word yet on any options. Always prepared – I am beginning to understand the concept. We were at the edge of nowhere, inches from the arctic sea but at least we had shelter, personal gear and our sleeping bags. Food however had yet to make it over on the helicopter lifts. This is starting to feel like an expedition.

Posted by brettseymourphotography at 2:50 PM