The Story of the Investigator - Part 2

New Years Day, 1852 the temperature is recorded at -50 degrees. The ship is still buried in a snow drift piled over the decks by hurricane force winds a few weeks before – 35 feet high, 165 feet long. The long, dark winter persists followed by the light of another spring. In September of 1852 the ships crew gather on the deck of the Investigator bracing for Captain McClure’s address. Although they know what’s coming, not one is willing to embrace the inevitable. “After carful observations it is my conviction that the ice will not break up this summer. Therefore, we are compelled to pass a second winter here at Mercy Bay” McClure declares. Another winter is upon the Investigator without a single day under sail in open water all year long. 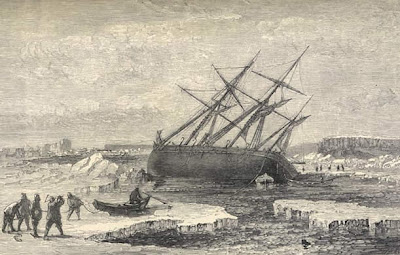 The third winter takes its toll on the Investigators. Their rations are again cut. Formal meals are discontinued and what little food remains is distributed each morning leaving each man to decide when to eat his share – for breakfast or dinner depending on the degree of his will power. The crew has difficulty sleeping due to hunger. The winter is no less forgiving. Temperatures reach -90 degrees, the coldest recorded on the expedition or any previous expedition to the Arctic. Its so cold that hunting excursions are all but impossible. On one such outing the stock of a sailors rifle cracks and shatters against his shoulder upon recoil due to the intolerable cold. On New Years Day, 1853 the ships doctor examines the crew. Scurvy is prevalent and life threatening. The men complain of dysentery and faint at the slightest exertion. One sailor awakens to find that several teeth have fallen out while he slept. By the end of January more than a third of the crew are incapacitated, most suffering from scurvy and starvation. 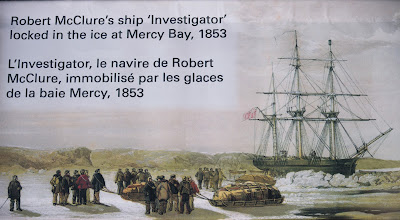 In early March, 1853 it has become apparent that to stay with the ship is to die. McClure announces his intentions and breaks the crew into to two groups. The first group, containing 26 sailors (most of them frail and barely coherent) will take a sledge, or man drawn sleigh, some 600 miles west over the ice. This epic journey will be followed by rowing a boat through the open sea, navigating ice bergs, with aspirations of being rescued by a whaling ship in Baffin Bay and eventually sailed back to England. Of the two officers in charge of this expedition, one is in sick bay and the other a raving madman. The second expedition, comprised of slightly healthier individuals, will travel by small boat down the McKenzie River to the Hudson Bay and (hopefully), with the help Native Americans, journey through the North America wilderness to Montreal, then New York where they will attempt to secure passage back to England. Although both missions are seen by most as suicide, desperation has set in and both parties will depart on April 15. Rrations are increased for the upcoming expeditions. Ten days prior to departure, the first death comes to the Investigators from the effects of dysentery. The flowing day as the crew is determining how to bury their shipmate, an approaching object is seen moving towards the Investigator.

Posted by brettseymourphotography at 2:15 PM