Walking in the Footsteps of History 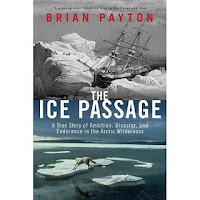 Every now and then you get a chance to walk down the path of history. It may be the Coliseum in Rome or the Freedom Trail in Boston. Perhaps it’s a visit to Pearl Harbor where you can stand over the USS Arizona or a trip to Arlington where the countless fallen have been laid to rest. On this particular expedition I have had the opportunity to not only dive on HMS Investigator, but also walk in the footsteps of many of its crew in the exact location where they spent years of hardship trapped in the Arctic. As if to squeeze every morsel of visceral stimulus out of the expedition, I downloaded The Ice Passage, A True Story of Ambition, Disaster, and Endurance in the Arctic Wilderness by Brian Payton to my iPad. It is the retelling of the HMS Investigator based on the journals of both the ships captain, Robert McClure and the ships surgeon, Johann Miertsching – and one of the most gripping tales of true life perseverance I have ever read. For my part, mere yards from the actual shipwreck as the arctic wind whistles through my tent history has a way of coming to life. Now, let me be the first to say as I blog wearing my Patagonia thermals, laying in my -20 degree goose down sleeping bag, on my therma rest in my high-end, project supplied tent that I am no way comparing my time spent in the Arctic with theirs. The crew of the Investigator had it tough, far tougher than I will ever experience in my lifetime and perhaps tougher than most in the history of exploration. I can hardly think of a location, with abysmal weather and dwindling food as they faced, worse than those during the four winters of 1850’s. Even with my modern equipment, the story has a bit of context when reading on the shores of Mercy Bay. 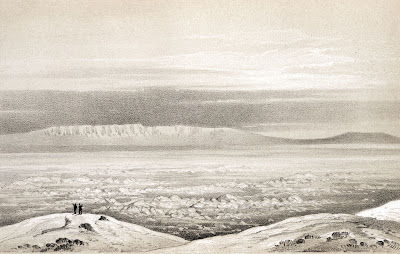 Aside from the shipboard life on Investigator, The Ice Passage retells the activities the crew undertook on the tundra as well. Hunting became the obsession of the withering crew. While reading the book, one passage stuck me a particularly gloomy. Payton writes “Each day, a man is dispatched to the sodden shore to hike atop an eight-hundred foot hill to take long, ponderous looks at the ice-covered sea. Each day, he returns to report that there has been no change, no sign of breakup or movement…The men mill about with empty stomachs, bereft of any sense of pleasure or – for some- even the will to live.” The “sodden shore” is most likely the exact location of our camp and up the “eight-hundred foot hill” is the climb to the north of camp in which these crewmen would hike to assess conditions. This being the last night on Mercy Bay, Marc Andre, Thierry and I decided to hike along the shoreline up to the carren, or marker, built by McClure and his crew at the highest point on this shoreline as a marker to any passing ships to indicate Investigators location trapped inside Mercy Bay. 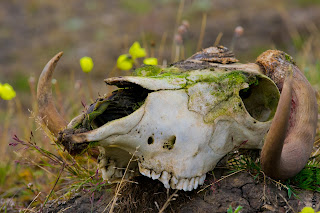 We departed camp around 11pm, in the full glow of the sun filled “night” sky. As we walked along the shore in the Arctic heat wave of 40 degrees it struck me that this was such a different place than the Investigator crew encountered. With the lack of ice breakup for two solid years, the chances that these men ever saw warm, 40-50 degrees was slim, at least for any extended time. Only recently has climate change and the melting of the polar ice cap enabled ice free waters and warmer temperatures. We walked further, past muskoxen and wolf tracks - all hunted in the 1850’s by the investigator crew for survival. How do you hunt such animals in the tundra with no cover, no place to hide? We began our ascent up the rolling hills to McClure’s cairn at the highest point overlooking the now open ocean. From this vantage point you can look North to the solid white of polar ice shelf. To the East was Mercy Bay, site of the HMS Investigator and our campsite along the shoreline. To the South was the vast rolling hills of the wide open tundra of Banks Island, glowing in the eternal midnight sun. And to the West you could see the open ocean, the longing of those men trapped in the icy grip of fate and destiny. My summit was met with awe inspiring views on an harsh, yet beautiful landscape - but as a mere visitor. I had every confidence that a full meal would be available to me in the morning, that my helicopter would arrive to begin the journey home and that I would reach my home, and those I love, in a matter of days. Theirs was a much different view. The endless ice. The ever sinking feeling of never being able to escape. The distant memory of their home, last seen nearly three years prior, would only be accessible after months on a treacherous ocean…if the ice ever breaks up. Walking in the footsteps of history often time has a way of reminding us of just how fortunate in life we are. 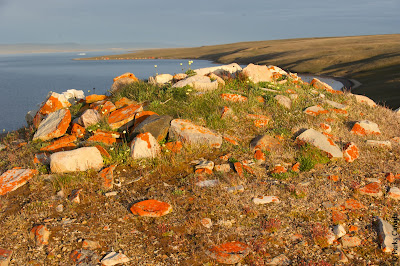 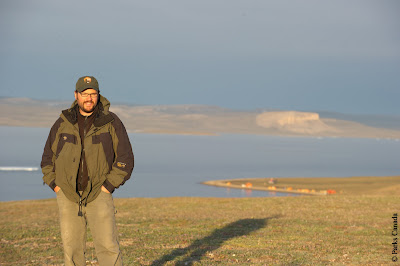 Posted by brettseymourphotography at 3:57 PM