Today, after a delay of three days the Investigator team is assembled on the beach at Mercy Bay. After much negotiation and speculation a helicopter was dispatched from a “nearby” camp (meaning several hours by air) to assist with the final sling loads and passengers necessary to begin the project. The final team members arrived at the Mercy Bay camp around 5pm. For the Parks Canada crew already at Mercy Bay, the late arrival of the stranded Polar Bear Cabin crew seemed like a chance to take a break from setting up tents, pumping tanks, building boats and unloading the cargo delivered by the helicopters. Possibly have some down time to lay out the operations and discuss project objectives. Shortly after the full team was assembled, I could tell this was not going to be a early day. Unseen by human eyes for 157 years, this team of underwater archeologist, who had first discovered the vessel almost a year ago and had spent so many weeks since planning this expedition, wanted to dive the Investigator. 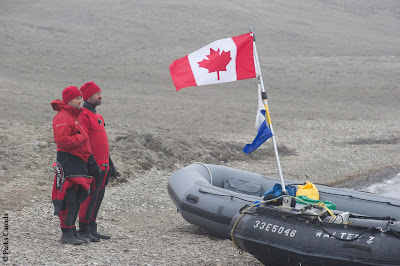 In only a matter of an hour or so the underwater team members were dressed in drysuits and standing on beach next to the inflatable boats. One issue to be determined was who would dive the Investigator first. Who amongst this fortunate team would descend the shallow 30ft and be the first to hover over the decks of this virgin shipwreck. To many in the diving world this will always be a dreams. Virgin shipwrecks are but myths, the holy grail of the underwater world. As diving capabilities become more advanced, so do the limits of discovery. 400ft, 500ft and beyond are now possible. Here we are with a historically significant ship, the subject of such an amazing story of discovery and survival, just offshore in 30ft of water. 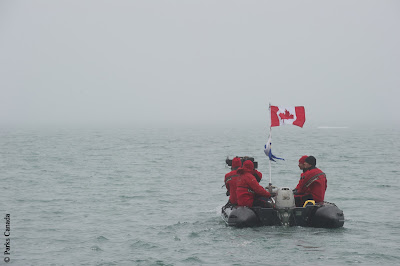 Posted by brettseymourphotography at 3:09 PM