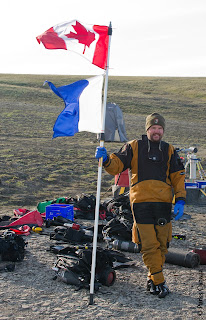 In my opening blog I mention how fortunate I have been over my career to work with a diverse and passionate group of explorers and archeologists. These individuals mirror the range in projects they undertake. I was talking with Marc Andre, the Director to the Parks Canada Underwater Archeology Service in the wee hours of bright sunshine one morning about our top projects in our careers. Sitting in the inflatable waiting for divers to surface in this bizarre landscape I reflected a bit.
Since joining the NPS I have had the privilege to photograph many once in a life time projects. Early on, right out of film school, I found myself living off the coast of the Florida Keys in the Dry Tortugas NP where the casemate of the civil war Fort Jefferson was my bedroom, crossing a drawbridge over a moat was my morning commute, and diving on shipwrecks 7 days a week was my job. Years later I was the project photographer for the Friends of the Hunley and the National Geographic on the HL Hunley recovery expedition. For six month we worked off-shore diving in surface supplied hard hats along side commercial divers on a project of massive scale. After months of intense work and weeks of 24hr operations we finally recovered the 1st successful submarine in maritime history which sank off the coast of Charleston, SC in 1864 – crew still aboard. In 2000 I was shooting documentaries for History, National Geographic and Discovery for the 65th anniversary of the Pearl Harbor attack on the USS Arizona. Around this time I was also working with one of the great underwater cinematographers, Pete Romano, owner of HydroFlex and the best UW director of photography anywhere, on the feature film Pearl Harbor. In addition to diving with the director, Michael Bay, and participating in the insanity that is a Hollywood blockbuster I was able to help the film crew capture the essence of the USS Arizona as it rest today. (sadly, the real USS Arizona was ultimately not “real” enough for the director and he had Industrial Light & Magic build him an entire Arizona model which appeared in the film). Just a couple years ago I was shooting for a PBS NOVA program, a lifetime series favorite and professional dream. These projects, combined with the experience and dives on so many other projects around the NPS and internationally have generated a lifetime of experiences.
To be honest though, this trip with Parks Canada to the Arctic has ranked up there as one of the very best. It’s the whole package. The ships history, the recent discovery, the remote location, the fact is never been seen underwater all make it a standout. More than just the subject of the project, the environment and living conditions have made is special. It’s the absolute opposite of a high tech, research vessel based, closed circuit rebreather mission. The Parks Canada Underwater Archeology Service are some of the most talented and dedicated individuals I have ever worked with. Add to that they are generally great guys with the right balance of work and family wrapped with a Canadian sense of humor. They have not only invited this lone American on the expedition, but insured that all the logistics of living in the part of the world for any amount of time were taken care of. My tent, sleeping bag, dry bag, food and even dive gear (minus the dry suit and heater vest – with water this cold, I had to be sure) have all been provided. They have taken me in as part of the team both in this remote location, and the project kick off, cookout hosted by a Ryan’s parents in Edmonton. 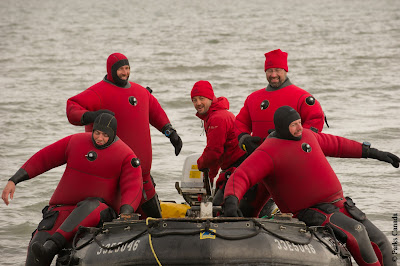 So as I bid the Arctic farewell, I will always remember the tundra, the perpetual sunlight and never-ending magic hour, a virgin shipwreck and its it’s shallow frigid final resting place. Perhaps more than anything I will recall the friendships that were formed in the tents, adding boiling water to an unknown substance in a bag, stirring and calling it dinner. The laughs when its 2am and just for fun you decide to blow up your drysuits and sumo wrestle on the beach just because you can. I will remember the team of Parks Canada archeologist who trusted me to document one of the most significant projects in many of the their careers. All this and they even let me hold the Canadian flag every now and then. Thanks guys, it truly was the project of a lifetime.

Posted by brettseymourphotography at 4:17 PM