On this site, as soon as I place my mask underwater visibility goes to zero. Its bright but I could not see my outstretched hand. It was like swimming in a oil and vinegars salad dressing. The melting ice flows created a fresh water/salt water lens on the top several feet of the bay. Knowing my buddy, UAS archeologist Therry Boyier was on the down line also there was nothing else to do but descend and wait for the massive halocline to pass. At about 10-15 feet the cloudy water dissipated and I could make out the silhouettes of the other Parks Canada divers. Apparently Marc-Andre had an issue with a regulator hose and had aborted the dive. Slowly we descended the line and landed on the baron, muddy bottom. The crackling of voices came over my headset. “This is Ryan on the bottom” “copy Ryan” was the response from topside. Each one of us checked in confirmed our depth, pressures and that we were on bottom. Just a short distance away, maybe 20-30ft I could make out a silhouette rising out of the mud. Investigator? As I swam over to the ship I could see the hull standing proud, perfectly level, resting on the bottom. Its blunt bow was thick with massive timbers and a huge shackle hung a couple feet down from the deck level. I signaled to Theirry that all was good and we could start investigating the Investigator. I leveled my camera and began dialing in the exposure. First frame – dark. Second shot, the same. I was getting proper exposure, but no light from my strobes was illuminating the image. They fired, but did were not registering in the photograph. Was there something inherently different about the Arctic waters that somehow “eats” light? My first impression of the site was that if someone took a bulldozer to a sailing ship and leveled everything above the main deck it would resemble this shipwreck. No masts, no railings, no rigging, no cabins. Nothing. Just a jumbled mess of wood scattered in every direction sitting on, and next to, a ships hull. The ice had taken its toll on the Investigator, and flattened everything in its path. 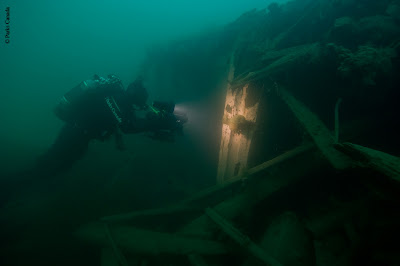 We continued to swim around the circumference of the hull by following its outline. I kept shooting, setting my ISO to 3200 and exposing for ambient light images without strobes. I shot a few images of my dive buddy, Thierry, on the video camera. Without the benefit of reviewing much of the ROV footage from last years discovery I had no idea of where I was. So far the only identifiable feature had been the blunt end of the bow where we started the dive. After swimming for 30 minutes, pausing frequently to shoot some pictures, imagine my surprise when I found myself back at the same blunt bow. One would naturally assume this would happen when swimming a circle around a shipwreck, however in this case it was quite perplexing because I didn’t notice every swimming past the stern! With the gradual curvature of the hull outline and the massive collection of overhanging timbers and wood I had just swam right past the stern without it registering my mind. No matter, hopefully there would be future dives to actually make sense of the shipwreck. The crackle of voices came from topside again. “Seymour, what is your pressure”? “”1200 psi, over” “Copy that, 1200 psi” was the reply. I shot a few more images around the bow of the ship, partially because that the only thing identifiable, and clicked the temperature setting up a couple notches on my heater vest as the 34degree water began to settle into my core. After a few minutes I transmitted to topside my intent to surface. “Topside this is Seymour, I’m coming off the bottom, max depth 32 ft”. “Copy Seymour” echoed in headset. Upon surfacing I kept the down-line loosely in my hands as I passed thought the zero visibility and was hit with sudden vertigo which often occurs to me when on ear releases pressure at a different time than the other. As I broke the surface of the water I was blinded by the bright sunlight. It was 1 o’clock in the morning and we had completed the first dive on the HMS Investigator, the dive of a lifetime!

Posted by brettseymourphotography at 3:26 PM